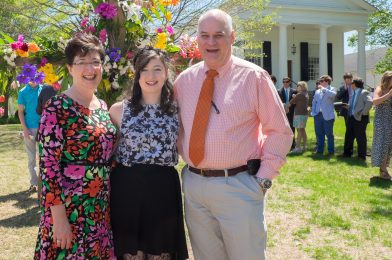 If you look closely, you will notice another family on the opposite side taking photos. The location for them is because they get direct sunlight. By standing on this side of the cross, we were not staring into the sun, and our faces were in the shade. So all I did was add fill-flash with the pop-up camera flash on the camera. While not my preferred placement of a flash did work OK for this family photo after church.

We were taking the photo at 12:34 p—one of the worst times to take a portrait of people outside.

Last Thursday, our family went to the Alive After Five event that we have from April till next fall every Thursday in downtown Roswell. After we ate at Mac McGee’s, I strolled around and found these two Union Soldiers. I took this photo without a flash. The main difference is the time of day I took the picture. I took this photo at 7:17 pm and the sunset at 8:10 pm. Due to the sun being below the buildings, there was no direct sunlight—just a tent light effect. The whole sky is lighting the subject with equal light from all directions. Even under the hat, the guy’s face is OK without a flash.

Remember that when taking pictures outside, especially during the midday sunlight, be sure and use a flash. However, don’t think of flash inside as much as outside.