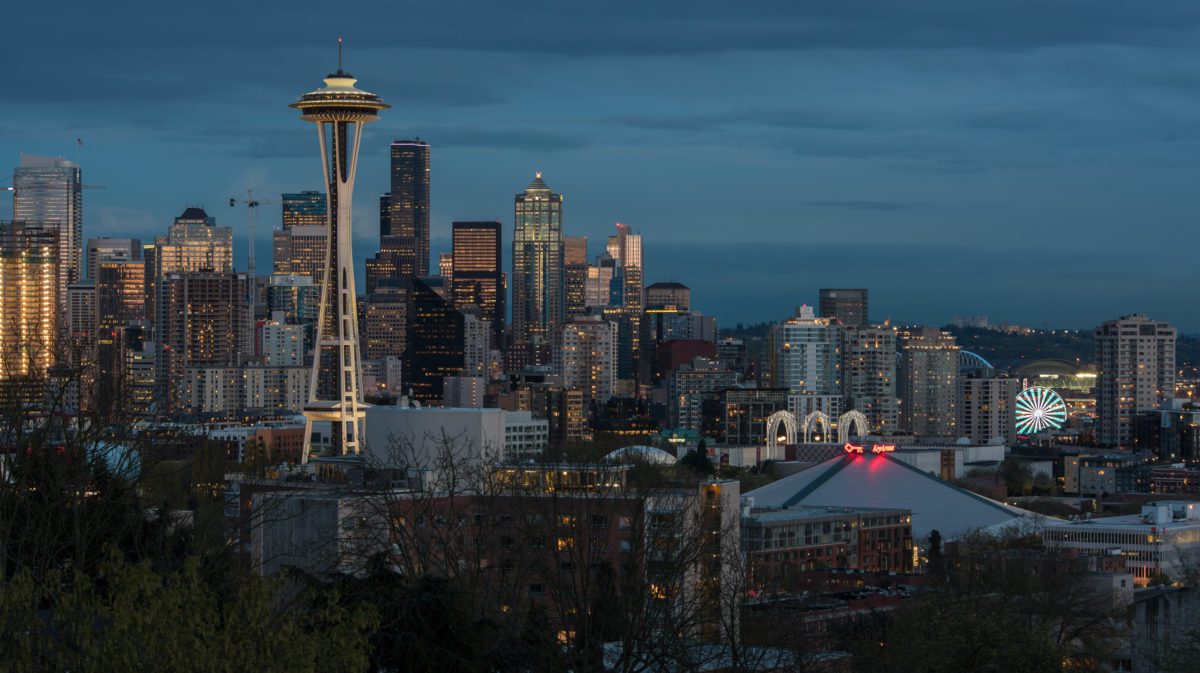 These photos are not captioned. The purpose here is to show you what to look for in a variety of images.

Often when I am doing a photo package on an event I am doing a skyline shot because the audience often wants to know where in the world something is taking place. In a magazine layout of a story this might be two-page opening spread to help give some context. Now during the grand opening of the very first Chick-fil-A in Seattle I also went across the street during the First 100 campout event to show that it was in the shadow of Microsoft. The first 100 that campout before the grand opening get Chick-fil-A for a year. One meal a week for a complete year brings out a lot of folks and creates a media buzz. I would normally use a photo like this to show all the tents during the campout, but I think the other photo gives more context to being in a new market. I dropped this in to show how I am shooting lots of variety to get those 3 to 5 photos. This is some of the First 100 participants. This photo helps explain why this was the biggest grand opening in the companies history up to that point. You can see while we were in a new market the fans were from where Chick-fil-A started. Here is a UGA graduate who works in the technology industry of Seattle. Some people would like to know what they do while waiting around camping–well corn hole of course.

I am always looking for those unique interesting photos to just pull the readers into the story.

Here is a package I did using many of the photos with an interview. See how many other possible photos you see that could be in the 3 to 5 image package.

Opener: Sets the scene for the story
Decisive moment: The one moment that can by itself tell the story
Details: Besides being like visual candy to the story, help often with transitions–especially in multimedia packages
Sequences: give a little variety to a situation
High overall shot: Gives a good perspective to how the elements all fit together
Closer: Besides the classic shot of the cowboy riding off into the sunset there are other visual ways to help bring the story to a close
Portraits: These photos are great for introducing the characters of the story

This shows the King’s court coming a shore. It shows the pageantry of the event. This is a medium shot to show the horn being blown announcing the court’s arrival. Here they are doing dances for the King and the audience as well. This shows the Chick-fil-A Cow, but also establishes the location. Medium shot showing some of the activities fans are enjoying. Showing some of the free sampling going on at the event. To start the game some 2,000 cows are parachuted in onto the fans. Action shot from the game.

Bees are on the decline, and the impact is putting U.S. fruit and vegetable crops at risk. To further our goal to be more sustainable, the Support Center installed five beehives and, in the process, help rebuild the bee population in partnership with the nonprofit start-up Bee Downtown.

Dan Cathy who is a bee keeper himself spoke and showed the guests the bees in the bee hives.

Establishing how many people were at the event. Closeup of them lighting the smoker to help calm down the bees. Medium shot showing that Dan Cathy knows that many bees will not bother you if you are calm around them. Tight shot of bees. Dan Cathy encourages people to taste the fresh honey.