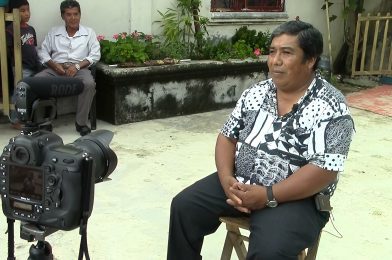 A client wrote to me the other day. Here was her question:

CLIENT:  A production company did a video on cup recycling, and I noticed this evening that if we could get stills from the video, we’d actually have most of the images we need. I recall you saying once that stills from video on are not high res/print quality. But I went back and asked, and they assured me because they shot it in high def, they could create hi res stills. In your opinion, is that accurate?

I responded first with these two sentences:

STANLEY: First I am really impressed you remembered my comment. My comments were not so much about the resolution, but how they are shot.

Then I went on and talked about these points below here. But to inspire you to read on, here was the client’s response to my comments:

CLIENT: This is AWESOME, Stanley. I hear every word of what you are saying. All  of it. I am taking it to heart and will influence this on my own team.

Aesthetic
Video is about movement, and stills are about a moment. So you need to preplan if you are the one doing stills and videos. Often many moving shots are not very compelling when you freeze them to one frame from that movement.
Getting both by one is impossible is why on every movie set has a still photographer. Capturing stills is slightly different than the video.

The Technical
If the video camera is 4k, you might have a high-resolution image that is usable. However, if I were to grab a frame from my video DSLR camera, it still isn’t the resolution when the camera is set for still photography.
Today many crews use a 4K camera that is a usable high-resolution still image for print and the web. I want to be sure the image is sharp. Sometimes, the sharpness of a single frame isn’t that noticeable during the movement until you grab just one frame.
If you like the image in the video and it was shot on a 4K video, then the frame may work.
Know who is pitching to you
There is way too much emphasis on video. Those promoting it are selling themselves on this as a replacement to stills—BIG MISTAKE!!!
Those motion capture guys [new name for videographers] that are promoting this as a replacement are showing a lack of industry knowledge.
The News Media
The news media have gone through many changes due to digital and, most importantly, since 1995, the web.
For the first ten years, the issue that slowed the progress was the bandwidth. It took a while to get us from dialing up to the ability to stream HD video on the web.
Once the ability to deliver video became possible, many naïve PR folks started to think this was the new standard and that the still image was dead.
I recommend it before reading. Further, you go to these television websites where you expect the video to be king. Take a moment and do the following.

Here are the links. I recommend that you take a few minutes to do your research and then come back and read the rest of this blog. [FYI, to avoid copyright infringement, I did not copy the screens and post them here]

http://www.cnn.com/
http://www.cbsnews.com/
http://abcnews.go.com/
http://www.foxnews.com/
http://www.nbcnews.com/
Newspapers even realize after trying to lead with video for a while that the numbers don’t lie. People will click on the still image galleries more than they will watch a video.
A good article addressing the use of stills as engaging  Photos on Facebook generated 53% More Likes Than the Average Post.
Notice that even when all these news articles talk about Photos and Video, they are using only stills or graphics for engaging you and not video Photos and videos drive the most engagement on social media.
My point is you have video production companies overselling and burning chunks of your budget on video when your media may need that but need still first. Video is in addition and not a replacement for stills.
So think about it this way. You have the opportunity to supply all that an editor needs to post to their website in the way they post their own stories. Sure, they may grab a frame from a video in a pinch, but this is the exception and not the rule for even TV.
PR needs to start supplying the package as the media shoots it. Way too many PR firms continue to operate the way they did in the 1970s. They continue to pitch, assuming new media outlets have the budget to come and cover their event. Instead, get them to like the story and let them go and cover it; that was the mentality back 30 years ago.
Today is 2014, when their slashing budgets. I worked at Georgia Tech, where we supplied the entire package. Text, Stills, and Video for packages are standard all over the media. On average, we were in the AJC every day of the year.
Georgia Tech is still ranked one of the top schools, and it had a great deal to do with the PR office I worked in for more than ten years created. John Toon, director of communication for many years, was the master of getting stories placed. He knew not to pitch something just because a researcher or professor wanted it promoted. Instead, he vetted those requests and helped get the crop’s cream.
When John Toon’s material went to a news director’s desk, they opened it because he was known for giving them great content, and in a way, they could use it with minimal effort or budget.
Both—Not Either/Or
Please don’t hear me saying don’t use video and stills instead. I am saying you need stills and video. I think video production companies do a disservice when they tell you they can do it all, and they never have their material in significant magazines or news outlets regularly.

Many of these companies produce high-end videos used in meetings and events. Their work is superb. But it isn’t what the media creates and runs. 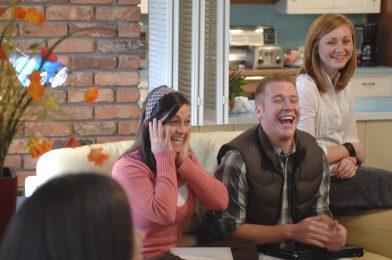 Storytelling is about moments.

You may think that sitting around a room where people are just talking; things move at a much slower pace than, say, a baseball game.

You would be wrong. I think the action moves just as fast as in any sporting event.

Sports photographers are not pushing their shutter on the motor drive and then picking a significant moment in sports any more than they do with people sitting around in a room. The motor drive is to take the photos after the moment the photographer is capturing them. Concentrating on after is because you don’t know if the ball will pop out of the catcher’s mitt, and the player sliding home then is safe.

The ever-so-slight head tilt or body posture can communicate so much. It doesn’t have to be a big gesture like one of the men with the hand gestures. It can be ever so subtle as the lady in the photo above.

Can you see the moment?

One thing that can kill a great moment is not being able to see it.

As you can see in these two photos of the young girl, the off-camera flash adds life to the face giving more dynamic range and, therefore, more color and energy to the photo. However, capturing the moment is more than just squeezing the shutter at the right moment.

Can you see how much more “POP” this photo has with the off-camera flash?

Photographers do all they can when they are telling a story. However, they must get the best light to help communicate the report on the subject and the best moment.

Sometimes I crawl on the ground to get into a position so you can see the subjects’ faces, and then since sometimes the best location for the issue has the sun right behind their heads, as in the photo of the guys painting the fire hydrant [fire plug for those out west] I again use an off-camera flash to fill the subjects faces with light, so they are not just silhouettes.

Other times I get as high as I can to look down on the subject to capture the expanse of surroundings and their faces.

I rarely have people pose and hold it for me, as in this photo of the two ladies. There was just a moment, and I shot it. It worked well, and I liked the moment but had I said hold it just a second, OK now 1 …, 2 …, 3 … this would have killed the expressions. So even when people pose for you, if they hold their face, it isn’t as good as just before they hit their peak smile. I love to shoot just before they reach it.

This way, they are smiling and not just posing.