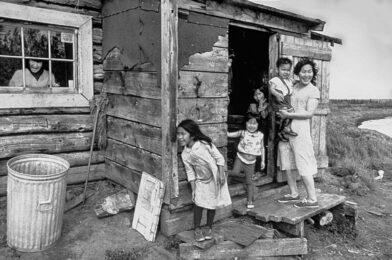 The Eskimo family is my favorite photo that Don Rutledge took. I have enjoyed seeing the world’s approximately 150+ countries and all of the United States without ever leaving my home. Don was traveling primarily with The Commission Magazine and Missions USA. Both magazines have won some of the highest awards in the country. The Commission Magazine placed third in the “Pictures of The Year” contest sponsored by the National Press Photographers Association in 1989 and 1990. CommissionStories, a newer version of the magazine, just won as a Finalist for the Magazine division of the Pictures of the Year contest behind National Geographic Magazine for 2014. Missions USA has earned similar awards. These Southern Baptist magazines are in league with National Geographic and Life Magazine for their photography and design.

Don Rutledge’s influence was the reason for their success. Before working for these religious magazines, Don was one of the staff photographers for the elite photography agency Black Star. From the 1950s until the 1980s, if you were to look for the photographers’ credits in the major magazines, you would find Black Star, the agency that handled publishing their work.

One of the biggest news stories Don covered was following and documenting John Howard Griffin, who transformed himself with drugs and makeup from a white man into a black man. In the book Black Like Me, he would later write about his experience as a black man.

Don’s story is a series of stories. Using the storytelling model I introduced in the last blog, here is a short story about Don.

Don Rutledge knew he loved to take photos and looked and noticed the Black Star agency in all the magazines. He wanted to learn more and work for them. So he contacted Howard Chapnick, the president of Black Star.

Howard asked for a portfolio, but Don didn’t have one. So Don pitched story ideas that Howard liked. Howard pitched these to his clients and told Don one was interested. Unfortunately, before Howard had a deal, Don had already shot the story and sent it to Howard.

Howard wrote back and told Don his mistake and also told him what was wrong or missing from that coverage. So Don went ahead and went back and filled in those holes in the story and sent it to Black Star.

The client loved the package and requested Don for more coverage.

When I got to work with Don, I jumped at it. Working with Don was the Luke Skywalker and Yoda opportunity for me.

One of the lessons I learned from Don was to scan the edges of the frame. Then, make the most of the entire structure from edge to trim and front to back.

If you look at the photos I have posted so far of Don’s, pay attention to two things: First, how the edges include details and do not make sloppy by cutting off legs or other items in the frame. Second, see how much layering is from front to back in all these photos.

Do you see all six people in the first photo of the Eskimo family? Notice how these are all over, and Don has introduced the family, the social status, and where they live in that one photo. He also captured the excitement and happiness that they experienced.

Take each photo and notice the edges and how people anchor the images. He pointed out, including their feet, but not too much. I was learning how to place people in context with the environment. The environment tells you a little about the people. Their expressions of them show how much they love life.

Notice that had Don cropped in tighter to the shoeshine man and Howard Griffin, you would not know he was a shoeshine man. It would help if you had the shoe polish and the footrest to help tell the story.

In all these photos, there is also just a little tension. Each image has the reader asking some questions. The pictures make you want to know more about each situation.

One trick Don often used was just including a sliver of light to see beyond the initial scene. With the Eskimo family, it is the tundra to the right. With the family in the Philippines, the door and the floor give you a sense that there is stuff beyond them. In the photo of the men walking in Cyprus, you can see the man walking away beyond them.

Notice in all these photos, you have a sense of a problem facing the characters. The boy holding the rat is probably the most obvious, but you can feel the tension each time. However, you can also sense a victory over their situations.

Editors and presidents of organizations sought out Don to help tell their stories. They saw in Don’s photos more than just a good photo—they saw that Don was capturing the inner souls of people in ways others just didn’t.

Although Don took hundreds of pictures, I hardly noticed because he did it in such an unobtrusive way.  When he put it all together he had really caught the highlights of the meeting and the impact that he wanted.  I just think that he is a first rate fellow from every measurement professional.  Of course, he can and does meet the highest standards of the secular world, and yet his deep spiritual commitment has caused him to give himself to the spiritual cause he believes rather than selling his skills to the highest bidder.  I just think that quality and character come through in his pictures.

Dan Beatty, the design editor of The Commission Magazine, commented,

Don is the one person who has completely influenced the direction of the magazine. Before Don came we knew that there was a certain way we wanted to present the missions material in the magazine.  None of us had a firm grasp on what direction we should go to achieve our goals.  Don really provided the direction for us to go.  Don never expressed any strong feelings about—in a critique type way—on the magazine.  Just Don’s presence and constant example of someone who always strives for the best is what guided us along. He was constantly putting us into contact with different individuals in the field of photojournalism and layout and design.  He felt these would be good influences on the magazine or influences that would help us along the road where we wanted to be with the publication.

I would not be doing what I am doing, at the level I am doing it if it hadn’t been for Don. He is an example of consistency and integrity in a field where that is not always a constant with the different people that I’ve met.  He represented something that I wanted to achieve myself.  He has been the biggest influence that I can think of on me personally and the different photographers that I have worked with along with Don.  The thing that impressed me most with Don is his sensitivity and his regard for human beings.  I think that is what made him the asset that Dr. Parks was looking for in communicating about Foreign Missions to Southern Baptist and other people as well.  The dignity of the human being no matter what the situation is so very important to Don.  To me that is the real strength of Don’s work.

Don Rutledge spent his career photographing more than 150 countries and all 50 states. He was published almost every single month of his career in magazines. Few photojournalists were more published regularly in magazines than Don. He died on February 19, 2013, at the age of 82.