In Part 1 I suggested the gear you need to use your DSLR/Mirrorless camera to do video. This post will do with some basic settings I recommend for the camera when doing a video.

On my Nikon D5 The Frame Rate, Resolution and Frame Size all show up in the upper right hand corner of the Live View on the LCD. We need to address all three.

While there are many other resolutions like 2K, 4K, 6K and even 8K I believe they are overkill for web distribution. Even my friend Ben Smallbone whose credits include the movies: Priceless, Taken, and Steve McQueen: American Icon to name a few of his movies told me that when it came to distributing their films to movie houses all over the country that they said not to give them anything bigger than 2K.

While you can shoot say at 4k for the similar reasons you would shoot RAW your computer must be really top of the line to process the 4K files. Unless you want to crop in on your video in post-production I believe there is little to gain for the average project to shoot higher than the Blue Ray Full HD 1920×1080 resolution.

Here is a good video showing why 24 fps is an industry standard for movies.

24 FPS is the Cinematic Look that is used in motion pictures. There are reasons to shoot other FPS and one worth mentioning is to shoot super high rate to then slow down for that “Slow Motion” affect.

As a rule of thumb, you want the denominator of your shutter speed to be approximately double the number of frames per second that you are recording. For example, when shooting at 25fps, your shutter speed should be 1/50 of a second. If you have the 24fps and do not have a 1/48 then pick the closest frame rate like 1/50 or 1/60.

Manual Mode – Shoot this rather than Aperture, Shutter or Program mode

If anything on the camera is set to automatic your exposure can change when say something changes in the frame like your subject just moves a little. The camera may think the lighting has changed and it hasn’t. Shoot manual mode and manual focus as well.

In video, just like stills, you can pick a picture color mode. There are modes on most cameras like: Standard, Vivid, Monochrome, Portrait and Neutral. If your camera doesn’t have a Neutral setting then pick Standard.

When later we cover your post production you can do more with a Neutral setting than with say Vivid. More on that in later posts on making videos with your DSLR. 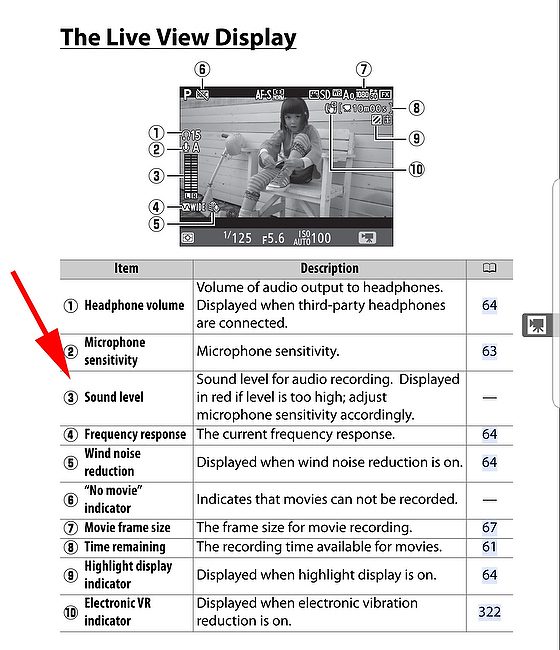 You want to have your recording levels set manually and not automatic for the same reasons for the video. When someone stops talking the Auto level will increase the volume and introduce noise.

Most levels on cameras or a separate recording device like the Zoom Digital Audio Recorders have a way to show you it is too loud.

Most video editors agree that the overall audio level of your audio mix (all of your audio combined) should normalized between -10db to -20db. I personally level my videos around -12db with occasional peaks to -8db.

What this means for me on my Nikon D5 is I want the level to peak right up to the last line before it goes red. I have a person talk for a while and then set the sound recording level before actually recording.

I recommend doing a test video for sound. Set your video settings to get a good exposure and audio levels for good sound. Record 30 seconds to a minute and then download to your computer and play using Quicktime or other video software that came with your computer.

For testing sound play something on your computer like music you downloaded. After you set your speakers for proper volume when listening to your music then play your video. If you have to adjust the volume to hear the recording then you need to adjust your recording levels. The biggest problem is if it is too quite or if too loud and giving you distortion.

Be very careful that you are not using the headphone volume as a way to see if the audio level is set correctly. Use the levels for audio the same way you use a histogram. Once you have those levels set then adjust your headphone volume to where you can hear properly.

Picking a location to do an interview

When picking a location you need to pay attention to two things: 1) Sound in the location and 2) lighting/visual.

My recommendation is to just turn on your microphone and put your headphones on and just listen to the environment. Are you trying to do a interview next to a waterfall or water fountain? That will prove to be difficult to impossible.

Finding a totally silent location would be “ideal,” but not always possible.