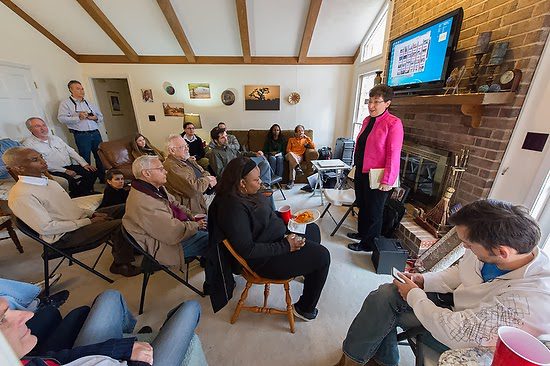 While I have tried for many years to get a large group of photographers together for mainly social time to get to know each other, it has been a struggle. However, this weekend we had thirty-two people show up for our meeting of Christian in Photojournalism Atlanta/Southeast at our home in Roswell, GA.

I was talking to my friend Ken Touchton and he said he wasn’t surprised because we had basically created a mini conference.

We had a keynote speaker, a devotional, camera repairs and complimentary lunch provided by Chick-fil-A.

Dorie Griggs reminded each of us while our jobs may isolate us from one another that we do need to come together and rely on each other for support.

1 Peter 4:10
New International Version (NIV)
Each of you should use whatever gift you have received to serve others, as faithful stewards of God’s grace in its various forms.

The Bible verse she used to remind us that we are to use our gifts to reconnect with one another was 1 Peter 4:10.

What was different from most photography communities is we encouraged spouses and significant others to come to the meeting. The reason is they are part of our support system. Those who support photographers have a lot in common as well they found out.

Also, spouses enjoyed meeting their spouses colleagues and getting another perspective on someone else who is also doing photography.

Since I am a photographer more than a writer I am hoping that these photographs are helping you see the emotional connections that were being made and the enjoyment people showed in being in this environment. Most everyone commented how this was a blessing for them.

I think coming together and talking to others doing photography makes a huge difference in our emotional condition. Of course people were bringing their latest cameras to show to each other. We are all have to be a gear-head to be a successful photographer and finding something that is helping us do a better job is so exciting we enjoy sharing with someone. The big hit with most folks was pulling out their mirrorless cameras and showing all that these cameras will do that fit in a pocket.

In December the Atlanta Journal-Constitution laid off all of their 10 photographers. They then gave each of them first shot at one of their 7 their new multimedia specialist positions. They no longer have just a photographer position anymore on their staff. Ben is also no longer just at the desk, he is out covering breaking news every day. In this role he is often the only AJC journalist on news scenes and is relied on to provide still photos, video, audio and reporting with accuracy and immediacy. He frequently contributes video to WSB-TV and audio to WSB Radio in the course of his work.

We asked him to walk through a typical assignment and how he gathers all this for all those outlets.

Our First Project
I wanted to introduce the idea of shooting a project where we could each find a person and tell their story. To introduce the idea I showed Chick-fil-A’s Every Life Has a Story.
[youtube https://www.youtube.com/watch?v=2v0RhvZ3lvY]

We are all going to find a subject and put together a package which we will share at our next meeting. We are hoping to then find a space to hold an event where we can invite the subjects and the community to see the stories and maybe for us to leave an exhibit up of some prints from those stories.

When we all arrived everyone was meeting new people for the first time. In one way or another we asked each other, “So what’s your story?” We all want to connect with each other. We not only want to connect through getting to know someone’s story, we also want to share our story.

Do you have a community? Look for a community to join and if there is not one you can find, then start one yourself.

Remember this is what God intended as we see in 1 Peter 4:10 “Each of you should use whatever gift you have received to serve others, as faithful stewards of God’s grace in its various forms.”

Once you understand God’s grace you cannot help but want to pay it forward through service to others.

So, when are you getting together with some photographers?