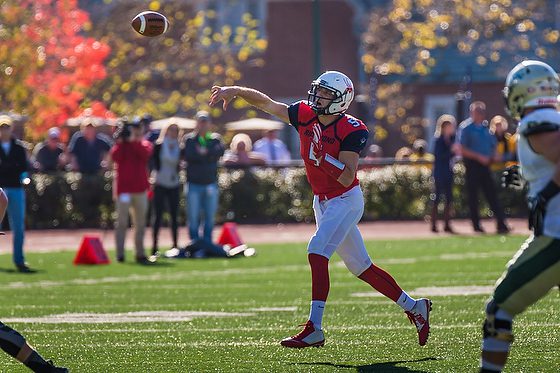 The weather in Richmond for the football game was between 48º and 57º F and sunny, which was great fall football weather.

This was the 125th meeting between the University of Richmond and William and Mary making this the oldest football rivalry in the South.

The sun was so bright that on this pass play the receiver was looking straight into the sun and therefore missed this well thrown pass.

While I wanted to surely capture some action shots of the historic game I also realized that photos like this with former Spiders Coach Dal Shealy with some former players and staff was just as important to commemorate the day.

Richmond’s #1 Jacobi Green leaps over his offensive lineman during the second quarter of an NCAA college football game against William & Mary, Saturday, Nov. 21, 2015 in Richmond, Va. Jacobi Green ran for 217 yards on 36 carries with a touchdown to help lead Richmond to a 20-9 win over William & Mary on Saturday, clinching a share of the Colonial Athletic Association title in the process.

Equipment I flew to Richmond to use for the game.

I did take more gear that is always in my Thinktank Airport Security™ V2.0 rolling camera bag, but this is what I took onto the field throughout the game. 95% of the time I just shot with Nikon D4 and the Sigma 120-300mm ƒ/2.8 DG OS HSM | S and the Sigma TC-2001 2x which gave me a 240-600mm lens.
I kept the 2X converter on most of the time until the team would get past the 20 yard line and then I would take it off and shoot with the 120-300mm range.
I was always facing the Richmond Spiders. Either I was covering their offense or defense where I could see their faces most of the time.
This way when they had those break away plays like this one of Jacobi Green I could capture it.
By covering the game from the endzone I was able to capture the defensive play of the game where in the fourth quarter defensive back David Herlocker makes on interception. He returns it all the way back to the Richmond 30.
Remember when covering sporting events they are much more than just the game action.
Capture all you can from the sidelines to the stands.
I even was able to catch a photo of Sports Illustrated’s rates top 15 college athletes of all time Brian Jordan.
So keep your eyes and ears open and you never know all you can capture. Just remember there is more than just the action during the play taking place at a college football game–especially one with a tradition of 125 years.