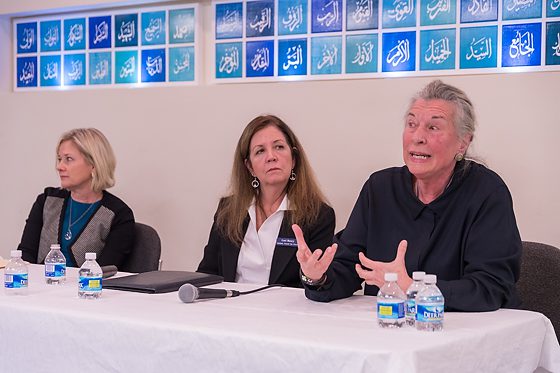 I went to the local Masjid in Roswell to cover three of the candidates running for the City Council office.

I wanted to show that this was pretty historical to show the Masjid hosting the meeting and capture the personalities of those running for office so that the audience would know more about the candidates than before the event. The tiles had the Arabic language on them, and I included them to show the location of the meeting.

I watched and listened. Each of the candidates running for office was very different from the others.

Shelly Sears was a nonsense business personality. She had a very similar approach to Trump. She wanted everyone to no she was not a politician but a successful businessperson. She was running on the platform that we need business people running the city, not politicians.

I noticed she leaned forward more than the other candidates and intentionally chose not to use a microphone. This, to me, was her visually saying she needs no help at all and can handle it herself. I waited for the moment. I thought that showing her take control, lean forward, and telling you how she will take control was the best way to capture her.

Marie Willsey reminded me of the stay-at-home mom involved in community service projects. She was serving on her homeowner’s board and loved doing this. She saw many of the same things facing the homeowners as those concerns for the larger community.

All the time, when she was talking, she was smiling. It was important that she came across as friendly and wanted to be seen as someone there to help her. So, I was sure to capture the smile and the warmth she was conveying to the audience.

Now the third candidate had been here before. Lori Henry was running as the well-educated issue candidate. She took issues and explained what needed to change to make a difference.

To capture this, I had to look for that expression that showed a lot of thought going into her comments. So I looked for that furrowed brow and intense gaze.

Thought before I shot

As you can see, I thought about each person. I felt their presence and looked for ways to capture those things in a visual moment that communicated some of this to the audience through the camera’s lens.

The first thing I did was to walk into the room and asses the room technically.

The room had fluorescent as well as tungsten lights. I wrote an earlier blog about this here and how to get a good white balance.

I did a custom white balance using the ExpoDisc and ensured that the shutter speed was no faster than 1/100.

Next, I sat in the front row center to get a clear shot of the speakers without any distractions. Also, I knew I could stand up for a moment and move to the side and get an overall picture at some moment.

I also brought two cameras. The Nikon D5 had a 24-105mm, which helped for the overall shot and the three speakings, but then I brought my Fuji X-E2 with the 55-200mm, which let me get intimate photos of them individually speaking without me leaving my chair.

Once I had all the technical stuff taken care of, I switched my mind to listening and finding those moments to tell the story.

I call all this my shooting workflow. It would help if you always had the best technical shot and the moments to tell the story. There is a process that takes place every single time.