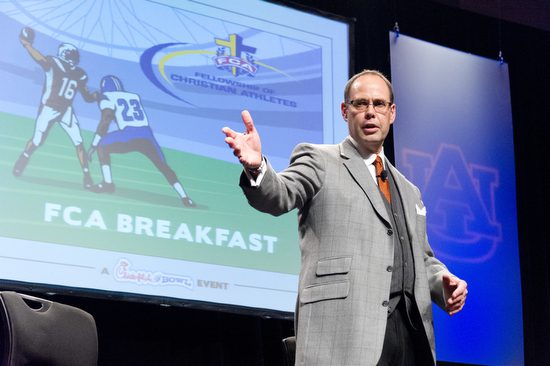 My morning started off early with the annual Chick-fil-A Peach Bowl Fellowship of Christian Athlete’s breakfast.

They had surprise guest of Heisman Trophy Winner Hershel Walker being interviewed by Ernie Johnson Jr. at the end of the event.

This year the event was moved to the College Football Hall of Fame and Chick-fil-A Fan Experience.

For many this is a fun place to come in Atlanta. Seeing all the memorabilia was just an added bonus that the football fans loved in addition to hearing from the football legends.

The emcee for the event was Ernest Thorwald “Ernie” Johnson Jr. is a sportscaster for Turner Sports and CBS Sports. He also interviewed Dan Reeves.

Dan Reeves spent  23 years coaching for the Denver Broncos, New York Giants and Atlanta Falcons. He played or coached in a record nine Super Bowls – five with the Dallas Cowboys, three with Denver and one with Atlanta. Prior to coaching, he also spent 16 years in the Cowboys organization – five as a player, three as a player/coach and eight as an assistant coach.

The keynote speaker was Benjamin Watson. In the 2005 AFC Divisional Game against the Denver Broncos, he made perhaps one of the most notable plays in NFL history, when he tackled Denver cornerback Champ Bailey one yard short of what would be a 101-yard interception off Tom Brady. Bailey intercepted the pass one yard inside of the Patriot end zone and proceeded 100 yards before Watson, the only Patriot within ten yards of Bailey, hit Bailey violently, knocking both the ball and Bailey out at the Denver 1-yard line. This play is of note due to the fact that Watson was on the other side of the field when Bailey made the play. He had to sprint an estimated 120-yards, run through a referee and never gave up in the chase.

My job this morning was to document the event. I got some overall shots to establish the location of the event and then also had tight shots of the speakers and everything in between.

I shot the event with what I use on the sidelines of the football field, because the distance to the speakers without standing right down in front of the lectern is a good distance away.

My tip for covering an event as this is to plan ahead. Which lenses will you need? Will you need a tripod or monopod? I used the monopod.

Take the time and think all through the event. If you can go early and scout the location.