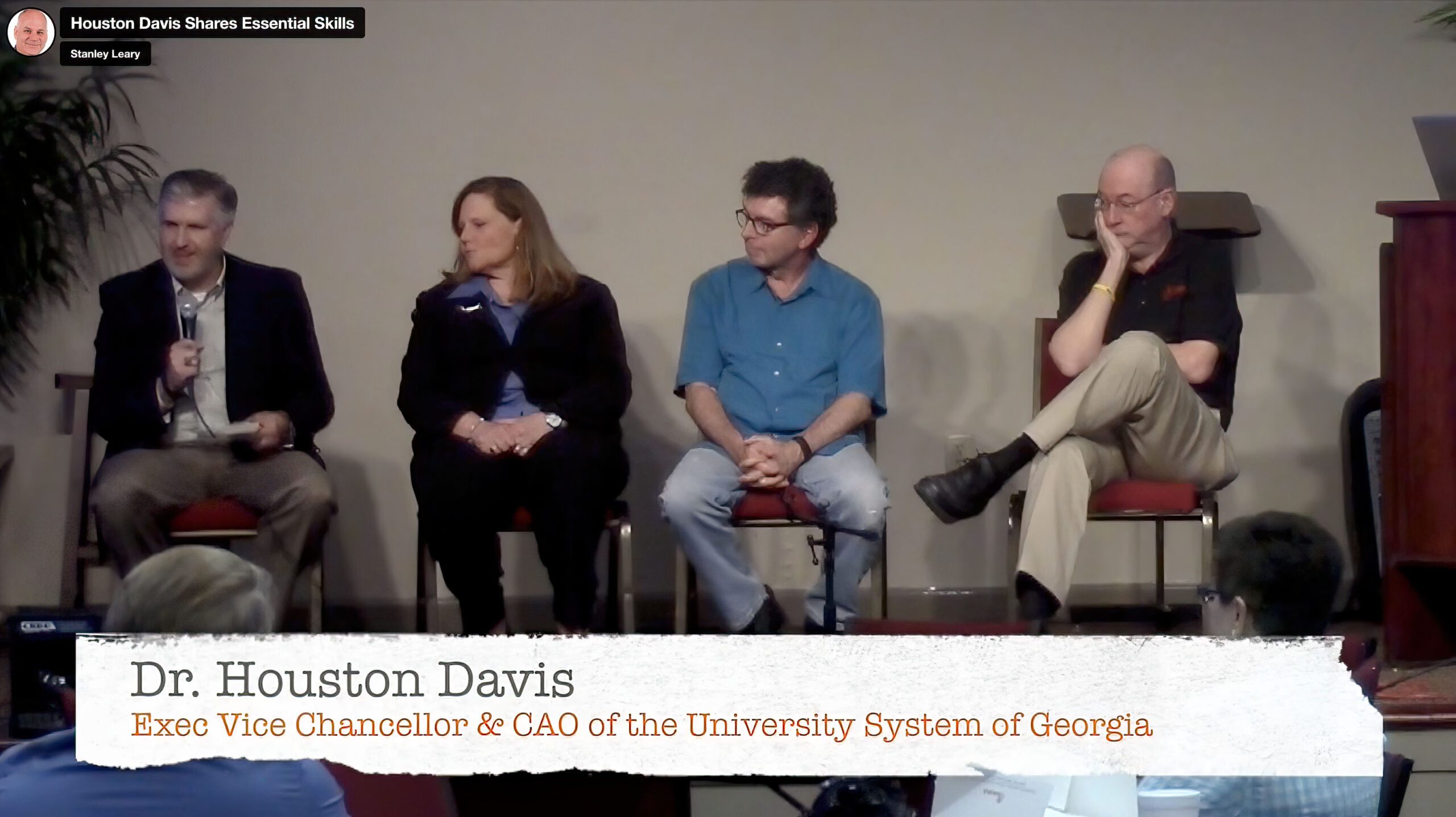 We had a panel discussion of these industry leaders; you can listen to them in the video above. They are discussing the state of the industry and tips they recommend for today’s professional communicator.

Before May 2012, Davis served as the Vice Chancellor for Academic Affairs for the Oklahoma State Regents for Higher Education and the state’s liaison on the national Complete College America initiative. Before 2007, he served as Associate Vice Chancellor for Academic Affairs for the Tennessee Board of Regents, on faculty and academic leadership for Austin Peay State University, in fiscal and academic affairs for the Tennessee Higher Education Commission, and as a regional counselor for the University of Memphis. In addition to his past professional duties, he served as director for the National Educational Needs Index project, a Lumina-funded initiative measuring educational, economic, and population pressures in the 50 states that influence policy and planning at local, regional, and national levels.

He is involved in research projects and writing on higher education governance, economic development, and accountability issues. He also serves on several national advisory groups on higher education policy, degree completion, academic preparation, and responsibility. He received his Ph.D. from Vanderbilt University with other degrees from the University of Memphis and Tennessee State University.

In addition to his professional duties, Houston Davis has served as director for the National Educational Needs Index project from 2004-2011, an initiative measuring educational, economic, and population pressures in the 50 states that influence policy and planning at local, regional, and national levels.

She holds an associate’s degree in journalism from Middle Georgia College and bachelor’s and master’s degrees in journalism and communication from Georgia State University. Before joining the University of Georgia in 1993, she spent more than ten years as an Atlanta newspaper reporter, public information officer, and marketing specialist. She has won numerous regional, national, and international awards for writing, editing, media relations, marketing, and communication training. She is an often-requested speaker on media relations, crisis communication, and other public affairs topics across North America.

She has published research and professional development papers on defining agriculture to urban audiences, effective media relations in urban markets, strategic issues management, and working and managing in a telecommuter workplace.

Her current work focuses on what promises to be the most significant social justice issue of the next decade – food security worldwide.

Michael A. Schwarz is an independent editorial and corporate photographer/videographer based in Atlanta, Georgia. Over a 30-year career, Michael has completed over 6,000 assignments for publications and corporations around the globe. His editorial client list has included USA Today, Fortune, Forbes, Business Week, The New York Times, Newsweek, Time, National Geographic Traveler, The Chronicle of Higher Education, and Sports Illustrated. His corporate client list has included The Home Depot, UPS, The Coca-Cola Company, Harvard University, Brown University, GE, Synchrony Financial, and Porsche.

Michael has a background as a photojournalist and is a 3-time Pulitzer Prize nominee. He has received numerous awards from the Pictures of the Year competition and was a winner of the Dag Hammarskjold Award for Human Rights Advocacy Journalism. Many years ago, LIFE Magazine featured Michael as one of the best young photographers in America in a special issue of their magazine. In 1998, Michael collaborated with author Ellen Spears on the book “The Newtown Story: One Community’s Fight for Environmental Justice.” Michael is a native of Baltimore and a graduate of the Rochester Institute of Technology. Michael has served on the Board of Directors of the Atlanta Photojournalism Seminar and the Atlanta Chapter of ASMP. He maintains membership in the National Press Photographers Association (NPPA), the American Society of Media Photographers (ASMP), and the Atlanta Press Club. In a recent reader’s poll sponsored by the Atlanta Press Club, Michael’s collaboration with writer Steve Sternberg, “When AIDS Comes Home,” was voted the favorite Atlanta story of the last 50 years.

In addition to his photographic work, Michael does digital photography consulting and training. His corporate clients have included: Nikon and Best Buy. He is a featured trainer with Blue Pixel Inc. and has been a lead instructor of Nikon School since 2001 and a workshop leader for the Mentor Series.

Before joining Chick-fil-A, Greg spent 25 years in worldwide management and executive positions with IBM in Atlanta, Tucson, and Tokyo. In his career at IBM and Chick-fil-A, Greg has edited several magazines and websites, produced numerous events, product rollouts, videos, and multi-media packages, and has hired countless photographers, videographers, writers, and producers – including several Pulitzer Prize winners. He has also worked as a writer, producer, photographer, and consultant for several well-known organizations.

Greg joined IBM after a career as a photographer and journalist for three newspapers and The Associated Press.

He graduated from Vanderbilt University, where he studied history, political science, and sociology while working as a reporter and photographer for the then Gannett-owned Nashville Banner.

Greg also is involved as a volunteer and consultant with several faith-based NGOs around the world. He serves on the boards of HOI, which focuses on Honduras and Nicaragua, and SCORE International, which focuses on the Dominican Republic, Costa Rica, Panama, and Cuba. Greg accompanied a SCORE medical relief team into Haiti shortly after the 2010 earthquake and worked with CRASH Japan and Samaritan’s Purse in Tohoku, Japan, after the 2011 earthquake and tsunami. In addition, he has volunteered in Honduras, the Dominican Republic, Peru, Guatemala, Nicaragua, Mexico, Cuba, Jamaica, and Cambodia.

Greg and his wife, Mary Belle, have been married 32 years and live in Marietta, Georgia.