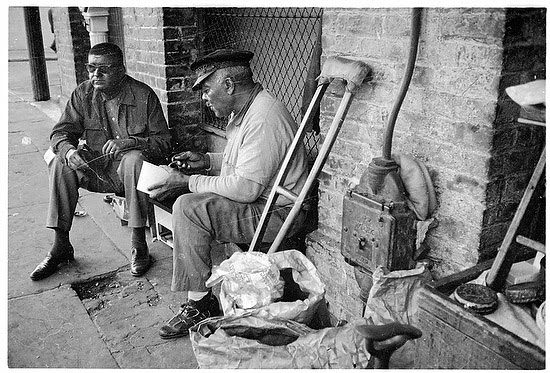 I love the depth in the imagery in the cinema-photography.

I was talking to my long-time friend Ken Touchton on the phone. We had both talked about the TV show Mr. Robot.

We were talking about the photography style of the show, and quite frankly, it is unique. We thought today’s large screen TVs of LCD Sizes 32, 40, 42, 46, 52, 55, 70, and 82 were bringing the cinema into our homes. Instead, the BIG SCREEN has finally arrived so that the director of photography for TV shows is no longer limited.

In the last show that Ken Touchton watched, he turned the sound down and just watched and studied, and this was when he realized it was like watching Don Rutledge’s photography once again. In this 1956 photo of John Howard Griffin walking down the street, you can see the similarity of using the negative space.

Now, running Don’s work in a newspaper was more difficult than in a magazine. The designer would take a photo like the one above in a magazine and run it across two pages. Sitting in your lap, it has the same effect as a 55″ TV screen would have across the room–Cinematic as we might call it today.

Don had a way of finding an incredible scene and then letting the scene unfold with the people moving in and out of the frame. You will see this over and over in Mr. Robot.

This photo of a Russian pastor is an excellent example of a composition style used in the Show.

When two people are in the photos in Mr. Robot, you see this quite often.

Here is how Don Rutledge has shot some street scenes in the past.

Don created tension by playing things off of each other in his compositions.

While the director of photography for Mr. Robot is doing what they think is unique, it has been around a long time, just harder to see in the media when it started in magazines like LIFE magazine back in the 1950s.

While most of today’s video is 50%, the closeup Mr. Robot is pulling upon the style of the great photojournalists like Don Rutledge. 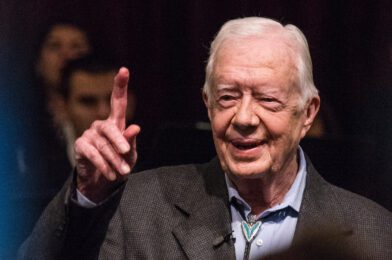 When Jimmy Carter became president of the United States in 1977, the world started to hear about being a “Born Again” Christian.

Many years later, I would be in seminary, where Wes Black, my youth education professor, opened my eyes to understanding “Born Again.” Professor Black pointed out that in the scripture of John 3:1-21, Jesus was talking to Nicodemus specifically.

Nicodemus was a Pharisee who was a member of the Jewish ruling council due to being born into his family. His status in life was due to his parents. Jesus was pointing out that his value must be placed solely in God and not in things of this world. He needed to be “born again,” or as in Greek, it meant to be “born from above.”

“Born Again” was the starting point for the lecture that day many years ago in Professor Black’s class. Black would talk about how Jesus would speak to the woman at the well, to those he would heal, and to help us see that each time the message was different. He didn’t tell all of them they needed to be “Born Again”; he only said this to Nicodemus.

Dr. Black shifted from the scripture and went to the whiteboard, and started to draw the map of a school. He then labeled the different rooms and places around the campus. One room was the band room, another art, then the library, on to the cafeteria, and then the other end of the school had the shop class and the gym. He drew a tree out front of the school and talked about where the smoking students would hang out.

Then room by room, Black asked us how we would talk to them about God. People talked about God being like the coach or the quarterback in the gym. When we got to the library, where many geeks hang out, someone said God is like ROM. ROM is strict; read-only memory refers to hard-wired memory in a computer that the computer relies on to work.

It was becoming quite clear that the lesson was that before you can communicate who God was to a person or group, you must know them. You had to know their terminology.

Dr. Wes Black opened my eyes that day in class as to one of the biggest reasons Jesus was such a great communicator–Jesus started with the audience.

Too many Christians went around telling people they needed to be “Born Again.” Their most significant mistake is the audience had little in common with Nicodemus.

Do you know your audience?