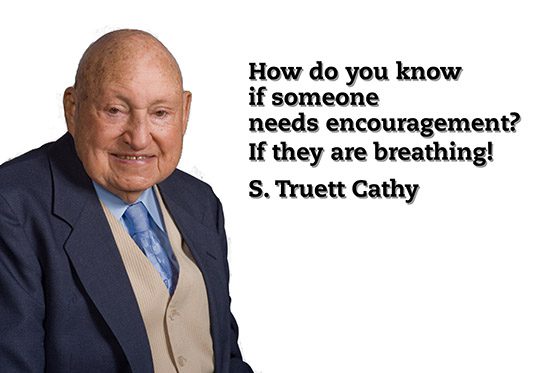 Shortly after making this photo of Truett Cathy I was asked to be on retainer for Chick-fil-A. For the past eleven years I have had the privilege to work with such a wonderful organization.

I have learned a great deal from Truett Cathy and here are some of those tips for you.

Truett Cathy the founder of Chick-fil-A had a Bible verse he used as a compass for his life.

Proverbs 22:1 — “A good name is rather to be chosen than great riches and loving favor than silver and gold.” [King James Version (KJV)]

Here is a more modern translation from The Voice that I prefer, “A good reputation is preferable to riches, and the approval of others is better than precious silver or gold.”

Every time I was around Truett I was inspired and entertained. He loved to have fun as hard as he worked.

Here are some quotes from Truett that I think every business person should adopt and would make them more successful.

“Fall in love with your work and you’ll never have to work a day in your life.”

Truett would follow up this comment with if you are not having fun then you are not doing something right.

One of the keys to understanding this principle is learning the difference between GIVING and GETTING.

Too many people are focused on themselves. Its not all about you. Once you understand this it is easier to experience the joy of life.

“My riches are my family and my foster children. I try to store any material wealth in my hand, not my heart, so that I always feel free to give it away when the opportunity rises.”

Being around Truett you see that he was very frugal and when he did spend money he was often getting a great deal. I heard more stories about a great deal Truett would get and I was always impressed.

“Nearly every moment of every day we have the opportunity to give something to someone else—our time, our love, our resources. I have always found more joy in giving when I did not expect anything in return.”

No strings attached was the way Truett operated. He was the first to put a restaurant into a mall and to get people aware of his Chick-fil-A sandwich he gave away free samples.

If you met Truett you most likely were give a BOG—Be Our Guest card. All you had to do is go to a Chick-fil-A restaurant and give them the card and they gave you a sandwich. You don’t have to buy anything to get it.

“My business grew on my understanding that customers are always looking for somebody who is dependable and polite and will take care of them.”

Everyday Chick-fil-a is checking to see that their standards for food preparation are at the highest they can be. They hire consultants to come into their restaurants and measure the operational side of the business. They look for ways to improve the experience for the customer and cut waste.

Chick-fil-A has a training program that helps not just train but retrain everyone to keep the customer always first.

“Many of the unexpected opportunities we encounter are small but significant.”

Words are carefully analyzed so that the customer feels appreciated. Truett Cathy trained the entire workforce that when someone says thank you the proper response is “My Pleasure.” I learned more about this little phrase through the years.

“Looking back I can see that I had been preparing for twenty-one years to open the first Chick-fil-A restaurant.”

Truett started the Dwarf House in Hapeville, GA back in 1946. He expanded to two restaurants, but one day the second one burned down. He started the restaurant with his brother Ben, but two years into their business Ben died in a plane crash.

Later the original Dwarf House had a fire and over the weekend Truett made all the repairs and kept on going.

As you can see there were many opportunities for Truett to give up and do something else.
Many of my photographer colleagues are going through some tough times. Other than winning the lottery the only other way for success is hard work.
“One of the most meaningful truisms I have learned about leadership is that it’s all about action.”

I have talked to many photographers who are struggling and the most common thing I hear from them is I know what I should do, I just don’t get around to doing it.

Truett learned his work ethic from his mother. Truett was moved to tears during an interview. The person interviewing Truett asked if he was OK. Truett said he just realized that the only time he ever saw his mother’s eyes closed was when she was in the coffin.

While Truett worked very hard he also will most likely be remembered for the blue signs for Chick-fil-A on the highways which also say, “Closed on Sunday.”

“Businesses are not dishonest or greedy, people are. Thus, a business, successful or not, is merely a reflection of the character of its leadership.”

Years ago one magazine wrote about the success of Chick-fil-A making about 1.5 Billion that year. They said that being closed on Sunday left half a billion dollars on the table. When someone asked Truett about it, he disagreed.

Truett believed by giving all his employees one day a week off that they worked harder those six days. The restaurants that never close drain their employees. They need a day of rest to be with their families and go to church if they choose.

“Why would I retire from something I enjoy doing? I can hardly wait to get here.”

Truett was in his forties when he invented the Chicken Sandwich. He was 46 when the first Chick-fil-A restaurant open in Greenbriar Mall.

At the age of 92 Truett was still working and open Truett’s Luau in Fayetteville, GA. A new menu, a new concept and new restaurant was what he created.

Truett passed the baton to his son Dan when Truett was 92 years old. This past Monday Truett Cathy passed away at the age of 93.

Here are a few more quotes for you from Truett:

Like wealth, poverty also has the power to build us up and make us appreciate what we have, or it can break our spirits.

By ‘staying small,’ we also remain sensitive to the needs of others around us.

As long as you are being kind to your customers why not be kind to each other.

I realized the importance of doing a job and doing it right. Pleasing your customers and enjoying what you’re doing.

I worked hard for a C, but I had to work… I find that most successful people are C students.

I say the world is ruled by C students cause I was in that category, I didn’t get to go to college, because I was drafted when I finished, soon after I finished high school.