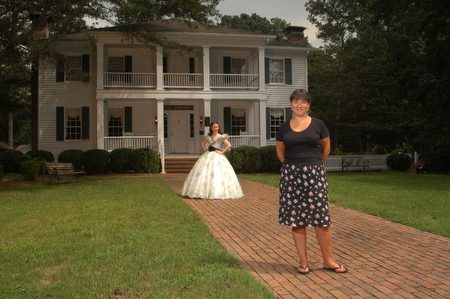 There are a lot of events in the Atlanta area to celebrate the 75th anniversary of the book Gone with the Wind.

If you’re in or around the city, consider these venues:

— Margaret Mitchell House tours showcase the Crescent Avenue apartment (which she affectionately called “The Dump”) and feature exhibits on Mitchell’s pre- and post-GWTW life, along with details on the making of the movie.
Other GWTW-related doings in Georgia:

— Marietta Gone With The Wind Museum: Scarlett on the Square, June 10-11, will stage a tribute to Mitchell with several cast members from the movie, along with question and answer sessions and a literary panel.

— On June 11, the Road to Tara Museum in Jonesboro will feature costumed storytellers linking the history of the town with stories from the book.

Today I would shoot it differently than I did in 2003.  I would want to shoot later in the day to have the lights in the house show up.  I would have more dramatic lighting by not lighting everything as evenly as I did here.

I enjoyed shooting this and remembered it when I saw the latest news about events celebrating the book this year.

DWI & Samad with housekeeping on the Royal Caribbe