What did I learn from my first game in the Mercedes-Benz Stadium?

If I had taken the time before the game and pulled up the last game in the Georgia Dome in Adobe Lightroom I would have had the exposures to compare.

My last game in the Georgia Dome I shot the Nikon D5 at 1/4000 shutter speed. I thought the lighting was darker in the Mercedes-Benz Stadium and shot at 1/2000 in the first game.

So this second game I shot all the action at 1/4000. This would give me sharper images due to the athletes constant motion.

In this series of the tight end trying to catch the pass I was able to get a great series of images all sharp due to the 1/4000 shutter speed.

Every photo I took was razor sharp. There were some where the auto focus was not where I wanted it due to a player coming between me and the play, but those were sharp, just not the right spot. When you increase the shutter speed you sacrifice the ISO. The reason I didn’t sacrifice aperture is it was already wide open. This sacrifice did introduce a little more noise, but I felt like for the way the photos are used it was an acceptable amount of noise. The photos that I liked technically the least were when the football player’s face was pointed toward the ground. This basically meant there face was like the shadow side of the moon. There is little or no detail in those faces. Now if it were a full moon where the light was hitting the face then it was just perfect.

Occasionally there was enough light bouncing off the field or another player to help brighten up those faces.

If the team was in the red zone I would take the 2x converter off and shoot the action at ƒ/2.8. The red zone is the area of the field between the 20-yard line and the goal line.

Now the only time I would take it off is if the play started in the red zone. If they had a break away play I didn’t have time to take it off.

I think this photo of the Georgia Tech player going for a catch that is shot at ISO 25,600 is great example of what my Nikon D5 is capable of producing. The advantage here is of course that the player is looking up towards the lights. This photo here is shot at ISO 32000 of the Tennessee players celebrating after a touchdown. This was the highest ISO I shot of the action during the game. ISO 40,000 was more than usable for me.

Why different ISO settings? Well I am shooting in AUTO ISO. 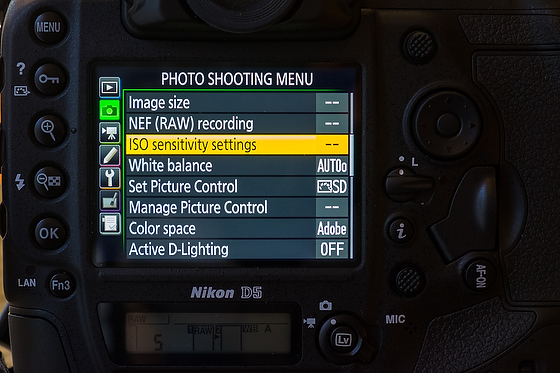 I go to the Nikon D5 Shooting Menu and the pick the ISO sensitivity settings.

While on this play there was interference on another play it was a touchdown for Tennessee. Just compare the photos above. They go from an ISO 5600 to ISO 40000. The way you see them here is pretty much the way most people will see photos from the game–on their computers or smartphones. Here is one photo of the fans in the stands shot at ISO 51200.

I loved the Nikon D5 for the performance it gave me to capture these images from the Chick-fil-A Kickoff game.