Our family has been waiting to be able to come to Orlando, Florida to take in The Wizarding World of Harry Potter–Diagon Alley at Universal Studios.

J. K. Rowling is the writer of the Harry Potter literary series which the books have gained worldwide attention, won multiple awards, and sold more than 400 million copies. They have become the best-selling book series in history.

While being the most prolific writer ever her books were transformed into series of films which became the highest-grossing film series in history.

One of the key gifts that she has is her ability to create a fantasy world that is quite visual and the movies were able to capture much of those elements, which Universal Studios Theme Park was able to allow her fans to enter into her world through the Harry Potter World.

Rowling consulted on the details for the theme park. There are many details that those who have read the books will appreciate, because some of those elements were not in the movies.

It is a photographer’s paradise when it comes to seeing visual cues that cross over cultures and unites more than 65 languages at the present.

Take photos no matter the time of day, but remember that some of these you might want to redo as I did here of my wife and daughter on Diagon Alley. I just used the on camera flash to reveal their faces on the street, which otherwise would have been silhouetted. Now you can see the street behind them better than during the daytime.

Here is another example for you

We visited the Nite-Bus a couple of times. During the daytime it is harder to see the shrunken head hanging. However this is a major part of this attraction. The head talks to you and even turns it head towards you.

Notice how much more the Nite-Bus looks more like you would expect in the book or movie when shot at night. What a concept, but you have to think about this to be sure you don’t miss a better mood shot. Also, notice how the light on the shrunken head helps it be easily seen at night.

I also chose to stay with available light and not use the pop up flash. The light behind me from the street lamp was lighting the scene just fine.

My daughter has very fair skin and wanted to be photographed with the theater production cases. To keep detail in her face I dialed the EV to -1.7EV

Here are the Lightroom setting I used to take the untouched RAW file and turn it into the JPEG: 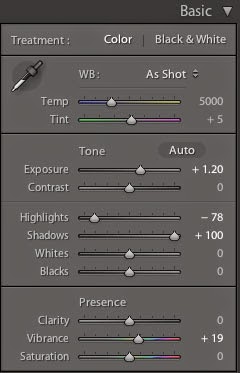 However, the simpler and more pleasing photo was to move my daughter out of the direct sunlight to the other side.

This too has been retouched in Adobe Lightroom with these settings: 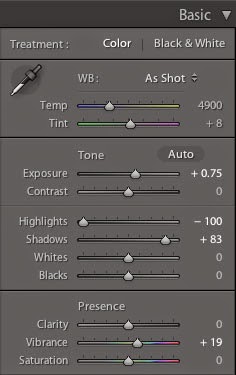 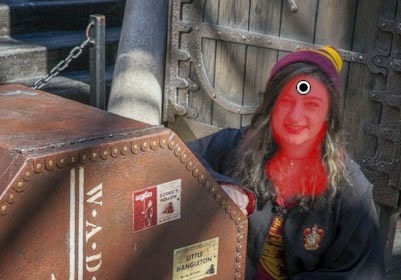 I am trying to do all of this like a street photographer and not carrying extra off camera strobes through the theme park on our family vacation.

One thing I really love about the Fujifilm X-E2 is taking photos at really slow shutter speeds. The image stabilization really works well.

I think it is important to capture photos of the family at the different attractions. It will be a memory jogger as we get older and look at these photos and remember the fun times we had as a family.

Honestly most of the time I think the Fujinon 18-55mm kit lens will suffice, but here I wanted to capture the puppeteer and to do so I needed more than the 55mm. I used the Fujinon XF 55-200mm which I had in a coat pocket to take this photo as well as the very first photo of the sunset.

I could have just shot details around the park. I loved how they created a dark part of Diagon Alley. I felt like I was in the book walking with Harry Potter.

I just hung outside the shop Borgin Burkes while my wife and daughter shopped. I then captured the moment my daughter came out to look for me. To me this is better than all the posed photos, but I still take those and just compliment with photos like this one.

My Fujifilm X-E2 settings for while at Universal Studios

Six Inches Behind The Viewfinder

I hope you figured it out by now but more than the camera it is your brain that will determine the success of your photos. There is a lot of thinking going on to get these photos. If you just randomly point your camera and expect it to do all the work, well you could have bought the cheapest camera and gotten similar results.

The high end cameras will let you do more but the key ingredient to their success is your knowledge of how to use the camera.

“The most important thing in photography is the six inches behind the viewfinder.” –Stanley Leary